"The Mosasaurus was thought to have hunted near the surface of the water, where it preyed on anything it could sink its teeth into, including turtles, large fish, even smaller mosasaurs."
—Sarah

Mosasaurus was a genus of large aquatic carnivorous lizard from the Late Cretaceous about 70-66 million years ago. Mosasaurus gave its name to a group of marine lizards - Mosasaurs. It fed on such prey as seabirds, sharks, large fish, plesiosaurs and even other mosasaurs.

We tried to capture the scene of Mosasaurus consuming a shark and made it into diorama (shark is available only with Exclusive Version). The statue is made with a high attention to details by recreating the skin wrinkles, muscles, water effect to be as perfect as possible in this dynamic pose. This 1/15 scale Mosasaurus statue measures approximately 26 inches tall with over 35 inches wide.

This is a must-have piece for all Jurassic World fans! 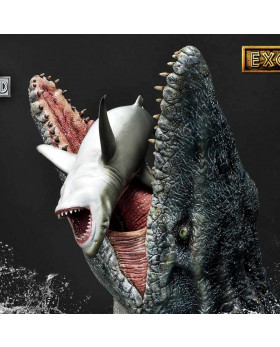