Prime 1 Studio is, once again, proud to present the latest addition to the Ultimate Diorama Masterline Series: The incredible 1/6 Scale Guts Versus Zodd from Berserk!

Doing our best to honor legendary Berserk creator, Kentarou Miura, Prime 1 Studio has faithfully recreated an epic clash between the Beast Swordsman and the Black Swordsman…frozen in time!

Guts, enraged that Zodd should dare stand between him and his quarry Griffith, has locked swords with Zodd! Zodd exclaims that Guts must go through him to get to Griffith! But this meeting is not like the last time Guts clashed with Zodd. Two years of Apostle-hunting has increased Guts’ power level so much, that even he is surprised that he can go toe-to-toe with the demon Apostle Zodd!

Prime 1 Studio has imbued this majestic 20-inch diorama environment with dynamic action as these strategic and skillful combatants make their thundering impressions in the snowy landscape, surrounded by tribute swords lovingly crafted by Rickert. Our deft sculptors have imbued Zodd with a monstrous physique, a grim visage, and a menacing stance. We have sculpted Guts to hold back Zodd’s attack with skillful ease, illustrating the very moment Guts’ Dragonslayer has started to crack Zodd’s sword. We have equipped Zodd with a synthetic fur loincloth, and for Guts, every detail, dent, and ding in his armor is faithfully recreated. Our painters have rendered this diorama as closely as we can to Kentarou Miura’s vision of this epic battle.

And for the Deluxe Version, add to the drama by switching between one of three interchangeable expressions for Guts! Or level-up Guts’ legendary prowess by attaching his heroic poseable fabric cape!

Let this Guts Versus Zodd Ultimate Diorama fight its way into your collection! A must for every die-hard Berserk fan! 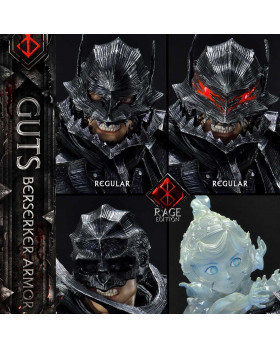 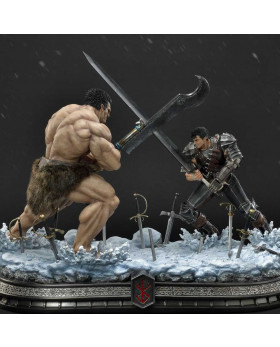